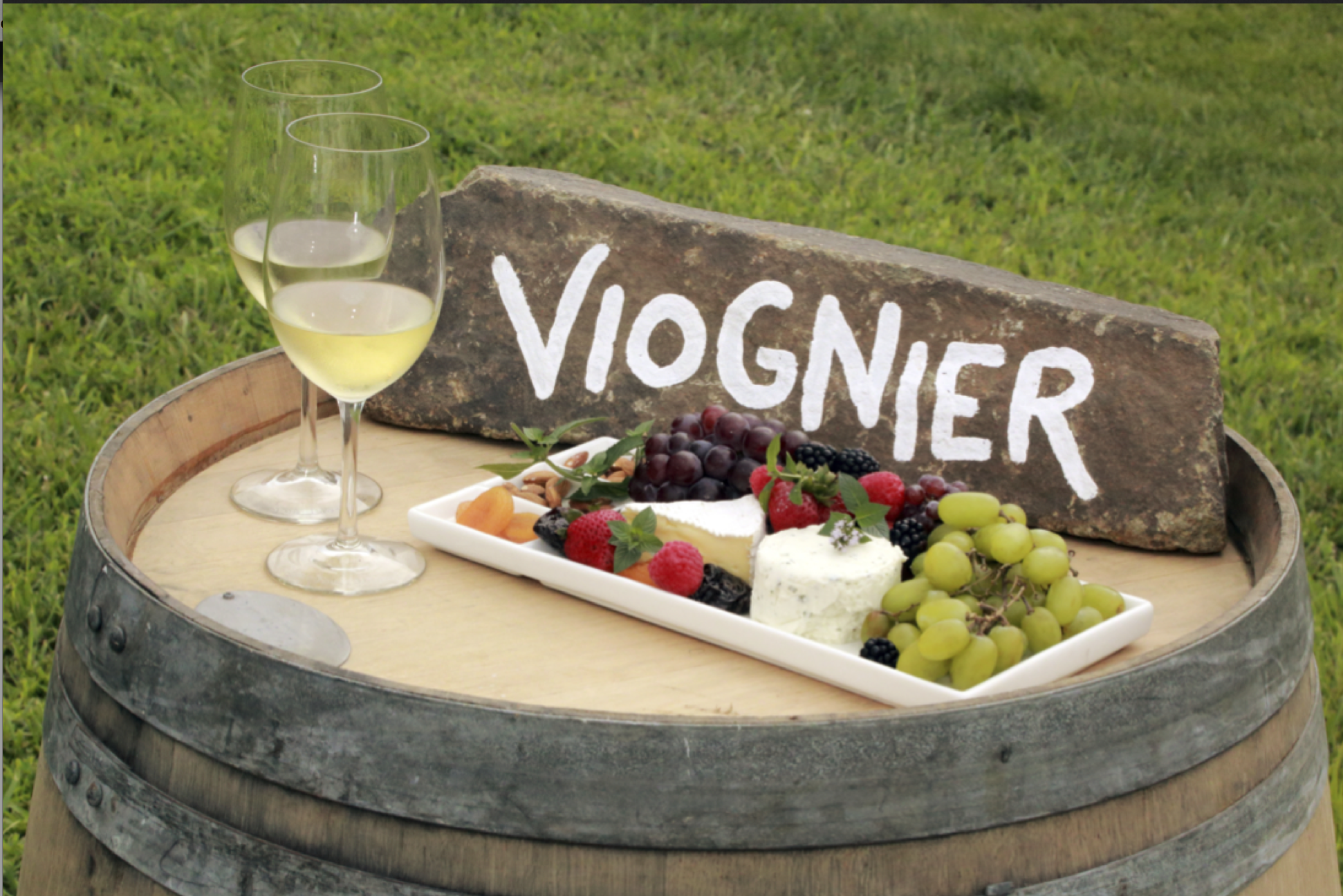 WINEMAKER CHRIS RITZCOVAN clearly has a particular fondness for viognier, as well he should. After all, the 2013 vintage of this fruit-forward, crisp white that he created for Charlottesville’s Jefferson Vineyards won a double gold medal at the 2014 San Francisco International Wine Competition this past spring. It was his first vintage as head winemaker at Jefferson—a lofty prize, right out of the starting gate. “I am always proud when Virginia wines place at international competitions because it means that as an industry we are moving forward in prominence,” he says, making his way through one section of the vineyard’s 6.5 total acres of viognier (pronounced vee-oh-NYAY). 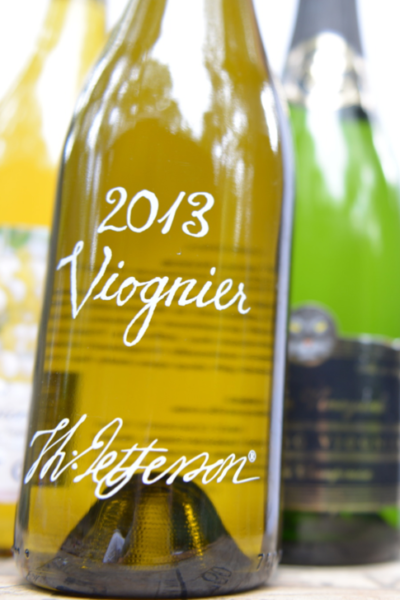 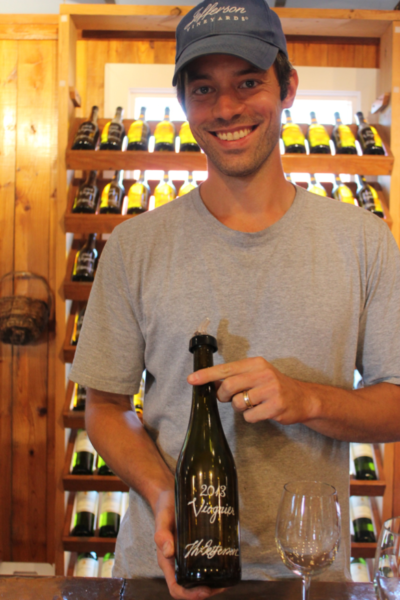 Prominence is undoubtedly the right word, as viogniers produced in the Commonwealth have certainly gained their fair share of it. The prevailing wisdom among grape growers and winemakers across the state is that our climate and soils are ideal for consistently producing quality fruit. Meaning, the viognier grape likes it here, and turns into wines that are consistently good—aromatic with a captivating floral character.

The Virginia Wine Board agrees. In 2011, it named viognier the state’s signature grape—a marketing ploy, to be sure, but one girded by truth. At last tally, 83 of Virginia’s 251 wineries are producing viognier, with the number—and popularity—continuing to explode. No doubt, it’s a trend that is boosted by victories like Ritzcovan’s, which helps to further establish the state’s viogniers as contenders.

“When Virginia viognier is good, it is quite possibly the best viognier made outside of Condrieu,” wrote Ben Giliberti in Wine News. (Condrieu is the appellation given to viognier wines coming out of the northern Rhône region in France.) Other noteworthy viogniers are being produced in Australia, Italy, and South Africa, not to mention California.

“Virginia has done very, very well with viognier,” says Bruce Zoecklein, enology professor emeritus at Virginia Tech, who is such the supreme expert that he has consulted for and helped every winery in Virginia. “That’s not happenstance. It’s a cultivated variety that we feel can provide some regional distinction. We do it better than the vast majority. If you have an opportunity, try comparing Virginia and California viogniers. Ours come off as fresher…and better.”

For those unfamiliar with this varietal, it can be summed up as “the red-wine-drinker’s white wine,” says Ritzcovan. “For several reasons, including that it hangs on the vine longer than most other whites, ripening to higher sugar levels and thus higher alcohol levels. And also because its complexity of flavors and balance of attributes is reminiscent of red wine.” 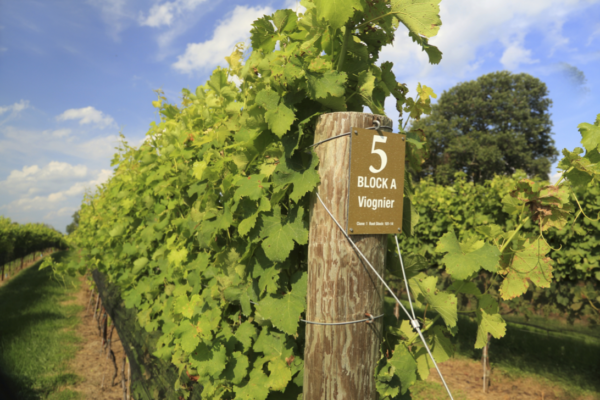 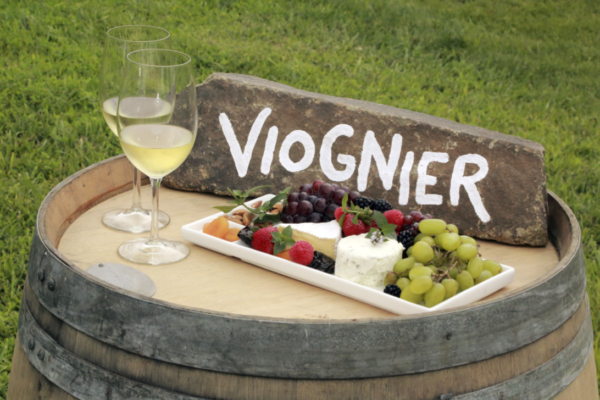 Viognier is a wine known for its notes of honeysuckle, apricot, peach, and tropical fruit, but can have mineral and coconut complexes as well. It’s more fruity than a chardonnay, but it’s not sweet.

If you’re noticing a theme here, it’s probably “floral” and “fruity.” But the Virginia style of viognier also tends to have a clean, bright finish. “The aromas are very pretty but restrained,” says winemaker Michael Heny of Horton Vineyards, not only the first vineyard in Virginia to plant viognier in the early 1990s, but the first east of Napa to do so. “We’re able to hit an elegant food-friendly style year in and year out. In contrast, the California style can have unctuous, hedonistic smells and aromas—oftentimes with over-the-top flavors and higher alcohol.”

In the 1980s on a visit to Napa, Virginia’s soon-to-be viognier pioneer, Dennis Horton, became taken with the Rhône-style wines that were garnering a following in California (this included viognier, along with syrah and others). Horton wanted to move to Napa to start a vineyard of his own, but wife (and present-day vineyard manager) Sharon didn’t want to go. So he decided if he couldn’t go to California to grow the grapes he wanted, he’d bring the grapes he wanted to Virginia.

As it turned out, viognier was a big part of his plan. Out of the 55 acres that were in his nascent vineyard, 13 were devoted to viognier. “I think Dennis was most excited about viognier,” says Heny. “For the other grapes, he planted only a few acres of each. But 13 acres of viognier made it clear that he was going to stake his vineyard reputation on it.”

It was a gamble that paid off. Horton’s 1993 vintage put Virginia viognier on the map for the first time. “It was a beautiful, beautiful wine coming out of a place that didn’t have much of a wine reputation at all,” says Heny. And then in 1998, they tried something new again: a sparkling viognier. That summer was especially warm and the viognier crop was too large. So the Hortons harvested a portion of the fruit a month in advance, didn’t want to toss it, and wound up turning it into a sparkling wine, made using the classic champagne method. “It turned out beautifully,” says Heny. “But it was born of practicality.”

Today, Horton’s viognier vines are some of the oldest in the entire country. It makes sense, when you realize that in the 1990s, there were only about 300 acres of this variety in the entire world. Today, Virginia alone has more than 300 acres of it. Talk about progress.

So what’s the reason for viognier’s resurgence, and notable success in Virginia? For starters, the grape has a particularly thick skin and grows in relatively loose clusters, both of which make it less susceptible to fungal degradation. “That’s an important aspect in a warm, humid environment like Virginia,” says Zoecklein, who studies— among many other grape-related topics— different approaches to growing viognier, in an effort to help vineyard managers produce consistent quality and quantities of the grape. For instance, one study highlighted the differences among training and trellising methods, specifically for viognier. “When you think about it, it’s not illogical,” Zoecklein explains. “Training and trellising affect both the heat and light that come into the grapevine, and that can affect aroma and flavor compounds.”

All counted, there are about 1,000 immature viognier vines growing on 2.75 newly planted acres at Jefferson Vineyards. And they seem to be thriving. “We call them our babies,” says Ritzcovan, who is not just Jefferson’s winemaker but also its vineyard manager. It’ll be another three or four years before they start producing harvestable fruit. Still, he is confident that the hard work will pay off. After all, he and a large team of workers (armed with a good supply of shovels) spent several days putting every last one of those babies into the ground by hand, with the hopes of improving yields long-term.

Even when the output is good, Jefferson’s 6.5 acres of viognier are simply not enough. So Ritzcovan buys grapes from a vineyard in Nelson County, which just happens to be having a great viognier yield this year. 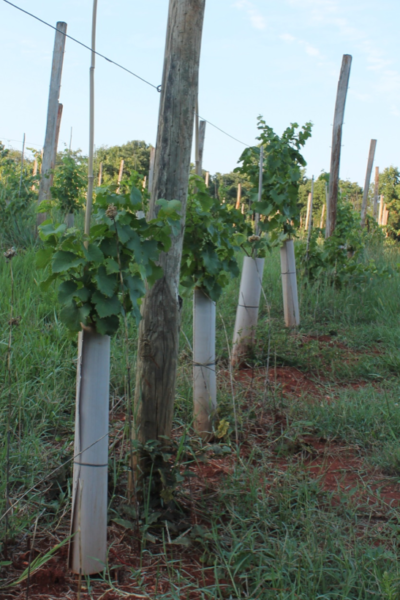 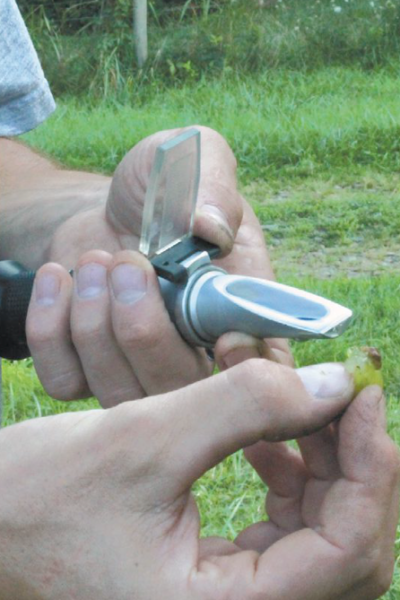 “Anyone growing viognier right now is going to have it scooped up…quickly,” Ritzcovan says, getting back into his pickup to drive several hundred yards down the dusty road to check on a section of viognier with mature, fruiting vines. “But we need to plant more in order to meet demand.” Still, any growth in planting across the state is going to be incremental at best, due to the cost of establishing vineyards.

Maneuvering along one small section of viognier, Ritzcovan unhooks the plastic netting that’s meant to keep out deer, yes, but also wild turkeys and other critters. As if on cue, in the near distance, a loud bird call is audible. “Hear that? That’s our bird guard,” he says, smiling. The sound is actually a recorded turkey distress call being announced across the fields, with the intention of scaring off any real turkeys on the hunt for fruit.

“Everything around here loves to eat grapes,” sighs Ritzcovan, plucking one from a particularly alluring cluster. He breaks it open and rubs the juice on his refractometer—the tool that allows him to measure sugar content. For viognier, he’s aiming for 23 Brix. Right now, it’s at 20. Still a few weeks to go.

This year the fruit quality is exceptional. And when Ritzcovan makes the call to pick—depending on weather, wildlife, disease, insect pressure, and sugar and acid levels—it’ll be harvested, pressed, fermented in neutral French oak, and then left to age in the oak for six to eight more months. Then it’s on to bottling in April or May. And the 2014 vintage should be released in late spring or early summer 2015. Ritzcovan estimates he’ll produce more than 600 cases this year, just as he did last year. The inventory of the award-winning 2013 viognier is quickly disappearing, by the way, if you’re tempted to try a glass for yourself.

And if you are, you wouldn’t be alone. “Over the years, Jefferson has developed a reputation for producing top-quality viognier, and we have a strong following to show for it,” says Ritzcovan, popping another grape into his mouth and using his tongue to push out the seed. He examines it. The beige color indicates the fruit isn’t quite ripe, he explains. When the seed is dark brown, that’ll be just one of many signals that the grapes are ready to be picked. “I place an emphasis on my viognier production, going through multiple weeks of trial blends before creating the final product.” 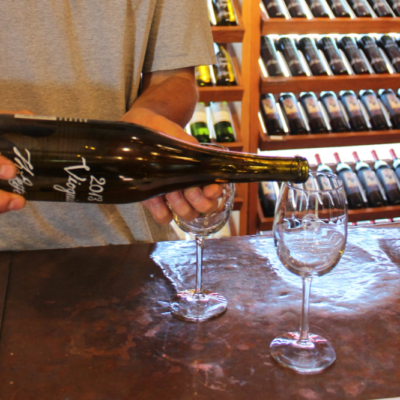 Winemaker Chris Ritzcovan pours a glass of his award-winning 2013 vintage. 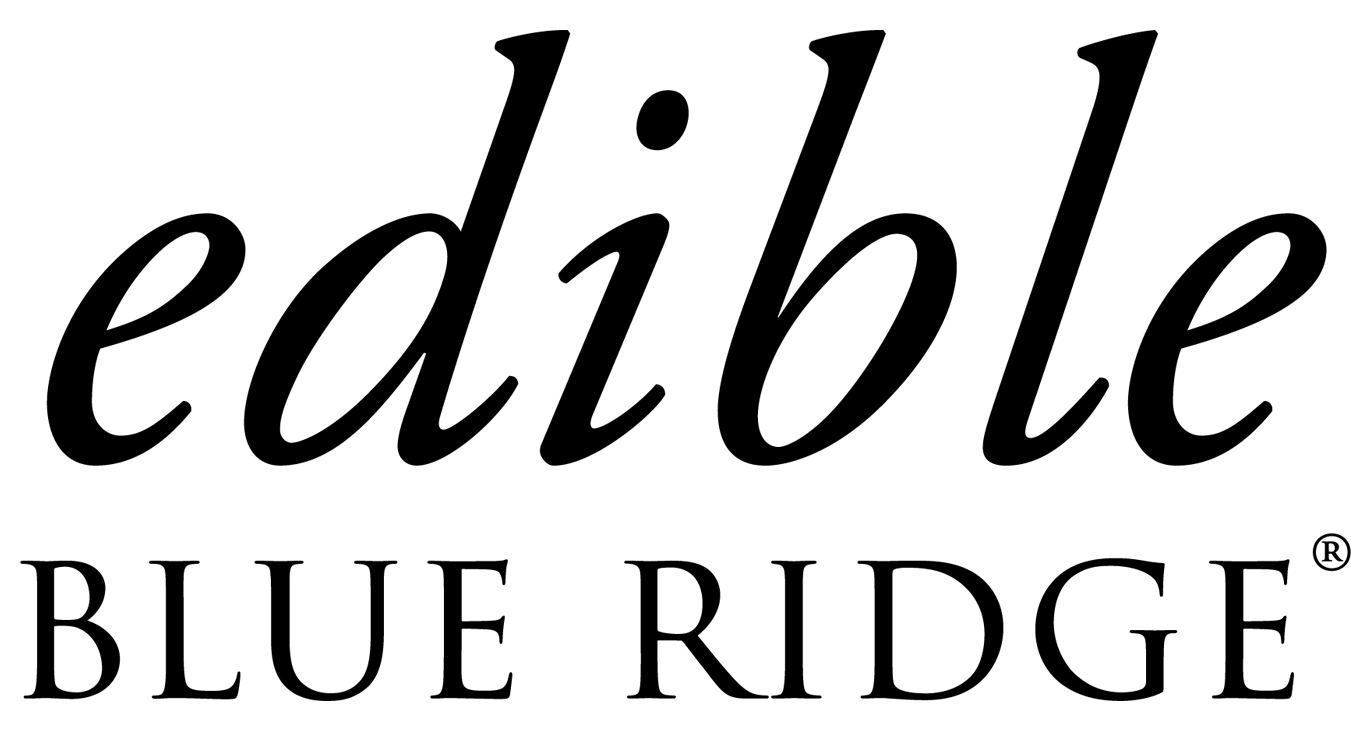